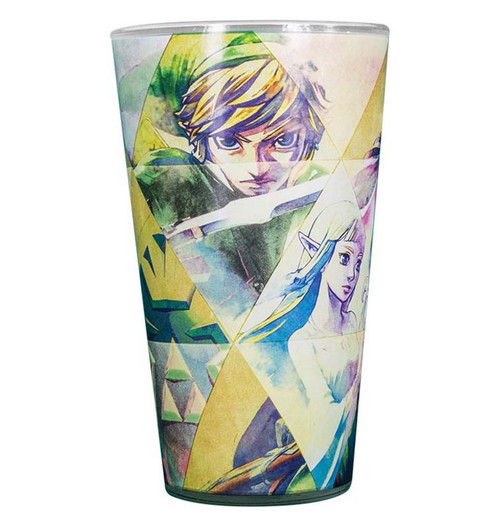 Featuring iconic artwork from one of the most influential video games ever made, there's more to this Hyrule Colour Change Glass than first appears. Inspired by The Legend of Zelda, the full fantastic image only becomes clear when a cold drink is added, creating a magical and mysterious effect, fittingly appropriate for one of the best fantasy adventures of all time. A 500ml glass, this is a great gift for gamers or fans of the series, and is designed with a classic Triforce pattern, making it an ideal piece of memorabilia celebrating The Legend of Zelda.

First released in 1986, The Legend of Zelda has become a hugely successful and highly influential franchise within the games industry, spawning numerous sequels, prequels and spin-offs, including Ocarina of Time, The Wind Waker, and Tri Force Heroes. The fantasy adventure has even included various cartoons and comic books, meaning the characters of Link, Princess Zelda, and Ganondorf have become household names to fans, and are some of the most popular video games characters of all time. Largely set in the realm of Hyrule, the adventure predominately centers around Link, and his efforts to capture the Triforce and save Princess Zelda.