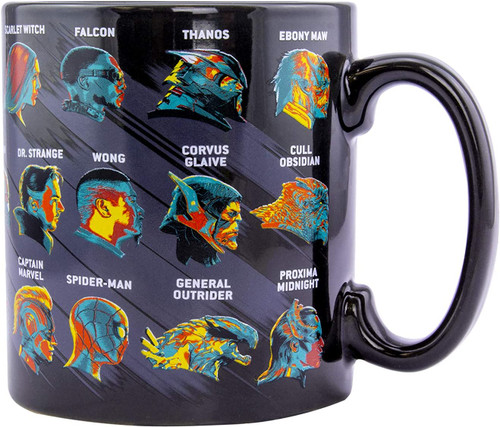 Take a break from saving the universe and enjoy a nice hot cuppa with all of your favourite heroes by your side with the Avengers Endgame Large Glossary Mug.

This oversized ceramic mug has a stylish black design featuring the iconic Avengers logo on one side, and a whole host of popular characters from the film on the other.

The characters that feature on the mug include Black Widow, Thanos, Hawkeye, Captain Marvel, Rocket Raccoon, and many others.

This mug is an ideal gift for comic book fans and anyone who loved The Avengers film series. It works perfectly as a Christmas or birthday present and is great for use at home or at work.

First appearing together in comic book form in 1963, the Avengers were labelled 'Earth's Mightiest Heroes', and their heroic deeds have entertained fans young and old for generations. With the Marvel Cinematic Universe, the Avengers have reached a whole new audience, transcending their comic book origins. Avengers Endgame is the final film in The Avengers series that includes The Avengers, Avengers: Age of Ultron, and Avengers: Infinity War. The film, which was released in 2019, was created by Walt Disney Studios and features an outstanding cast in including Scarlett Johansson, Robert Downey Jr, and Chris Hemsworth among others.